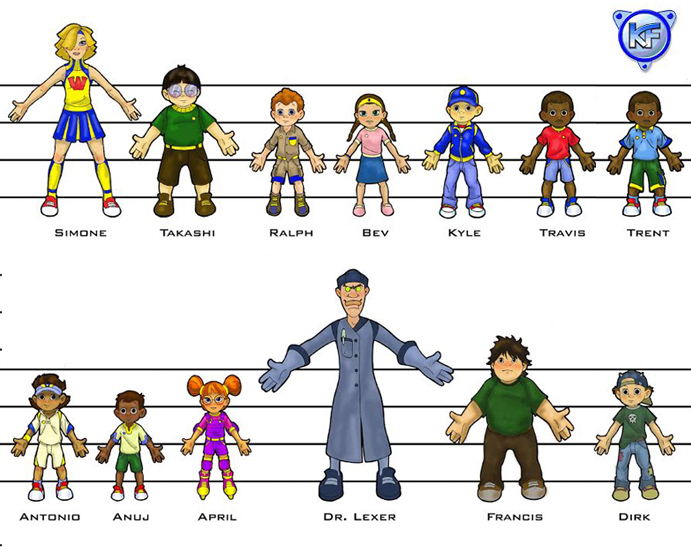 Trent leaned over the box putting away the toys as his brother Travis handed them to him.
“Jump Ropes – Check!”

“Medicine Balls – Check!”
“Stretch Bands – OUCH!”
Travis laughed, “I couldn’t help snapping it on your butt! The way you were leaned over….! “
Trent tried to make a mad face at Travis but then both boys started snapping the bands at each other laughing.
“Let’s finish up everyone!” shouted Kyle. “Club House meeting in 5 minutes!”
Trent, Travis, and Kyle are all Fitness Bunch Agents. The Fitness Bunch Club House sits in a tree about 3 stories off the ground on Maple Street. The meeting this Saturday afternoon was to decide the next Fitness Bunch mission.
“Ok roll call,” said Takashi as he opened his laptop. Takashi is nicknamed Taka. Taka is a computer whiz and he keeps all of the Fitness Bunch records.
“Trent, Travis, Kyle, Bev, I have all of you here. Has anyone seen April?” asked Taka.
“I’m here,” smiled April as she jumped through the trap door.
“So I am I,” said Antonio as he came in after April.
“Great!” said Taka. “Ralph and Anuj told me that they couldn’t make it today.”
“Ok, let’s start,” said Kyle. Kyle is the Fitness Bunch Leader. He has blue eyes and blond hair and like all the Fitness Bunch kids, he is in great shape and has lots of energy.
Taka took off his glasses. To most people, Taka looks a bit dorky with thick glasses. He looks a little heavy since he wears clothes bigger than he needs. But Taka’s clothes hide his strong, big muscles. And his glasses are special. They can act like a camera and record things from far away.
“We have three kids I think we can help,” said Taka. He put his glasses into a device on his computer. He was able to project images onto the wall taken by his special glasses. He showed pictures of the kids.
“First we have Graciela who is in third grade. She is small, but doesn’t eat very well. She likes to read a lot. But she doesn’t go outside and play very much so she often gets sick. We could help teach her about eating more fruits and vegetables and the importance of running around and playing outside.”
“I know Graciela,” said Bev. “She’s really nice and I bet it would be easy to make a few changes and she could become a Fitness Bunch Agent.” Some of the kids shook their heads in agreement.
“Next we have Jacob,” said Taka showing a picture of him. “He’s in fifth grade. He eats a lot of snacks after school and has started to put on too much weight. He does like to skateboard although he hasn’t been doing much of that lately.”
“Let’s pick Jacob!” shouted Travis who loves to skateboard.
“Naw, let’s see what else Taka has first,” said his twin brother Trent.
“Ok, last is Eugene,” said Taka. A photo of a sad, chunky boy was projected on the wall. “He is teased at school a lot by Dirk and Francis. He has been putting on more and more weight since he came into Garfield Elementary 3 years ago. He and his mom moved here after his dad went into the military service.”
Kyle said, “We have 3 kids to choose from. Graciela and Jacob could really benefit from us. We could make a difference before change becomes even harder. But I think Eugene is struggling with eating bad foods and doesn’t play much. What do you guys think?”

Keep reading our blogs to find out who the Fitness Bunch will select and what their next adventure will be. In the meantime, I will spend the next few weeks introducing you to the Fitness Bunch. They’re a pretty cool group of kids!